Day-ahead traded a touch lower in the range 22.50-22.65 p/th, with continental players pointing to a rise in temperatures as being a major factor in reducing demand on the day, in a market where the majority of participants were holding balanced positions.
Though Working-days-nextweek had traded several times on Wednesday at the 22.70-22.75 p/th mark, no such activity was seen today, and players were unable to say with certainty whether there would be any talk in any other immediate contracts beyond Day-ahead on Friday.

In the curve, Summer ’04 basis traded unchanged at +1.775 p/th, while Q1 ’04 was bid down having traded rangebound, following the release of US data indicating higher than anticipated weekly gas stocks.  Players said the primary factor determining curve prices over the coming days would be movements in the crude oil market, as participants remained sidelined during the maintenance period.

At the Dutch TTF, traders reported a series of offers in Day-ahead at around EUR 11.50/MWh, but the contract failed to trade. Players were unable to explain the strong selling interest, as one remarked: “The same people who were bidding on Monday —when no-one could find offers — were coming out with offers today.” Day-ahead surged on Monday to a high of EUR 12.15/MWh.

In the curve, there were rumours of an October parcel, lifted at EUR 10.20/ MWh, though volumes were unavailable.

GAS: The week in review
(Heren Energy) - The closure of the Bacton-Zeebrugge Interconnector for annual maintenance was the main driving factor on the prompt this week, as many... mehr 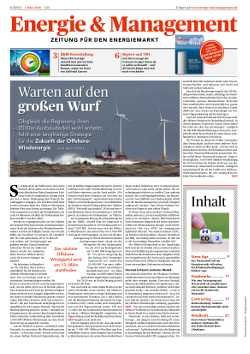